Theatre.
Ivana Stefanović has written music scores for more than 40 plays. She has worked in many Belgrade theatres, including the Serbian National Theatre, the Yugoslav Drama Theatre, Atelje 212… She has also composed for theatres in Celje, Novi Sad, Budva… Highlights of plays she has written for include Aeschylus’s Oresteia, Shakespeare’s Macbeth and Romeo and Juliet, Rain snakes by Per Olov Enquist, Long day’s journey into the night by Eugene O’Neill…

Work in the media.

Ivana Stefanović started working at Radio Belgrade in 1968. She edited and led In Euterpe’s gardens, If you like music, and other programmes. Soon after, she started conducting research in the sphere of sound and radiophony (The epistle of birds, 1974), and later started composing for the theatre. In 1975, she started working as a Music Assistant and later as Music Editor of the Radio Belgrade Drama Department. She worked there for many years, editing the music side of several hundred radio programmes. She selected, improvised and composed pieces for these programmes. Ivana Stefanović was the first editor of the Sound workshop programme when it was started in 1985 by the Radio Belgrade Drama Department. From 1989 to 1991, she acted as Music Editor in Chief of Radio Belgrade One. She resigned from this position in August 1991.

Radiophonics.
Ivana Stefanović started working in radiophonics and other fringe music movements, such as Ars acustica, as early as 1968. Her radiophonic works, Lachrymosa, Metropolis of Silence/Ancient Ras, Lingua/Phonia/Patria… have been broadcast on Serbian and international radio stations. Lachrymose hase been produce by ÖRF (Austrian Radio) and broadcasted on ÖRF, Vienna, 1993. as well as First Eastern Dream, produce and broadcast on Chanel ÖRF, 8 October 1998.

1986, acted as artistic director at Muzika Festival of Contemporary Music in Serbia

1992, took part in Ars Acustica at the European Broadcasting Corporation (EBU), and participated in the Radio Beyond London Festival

1993, was member of the Board of Directors at the Soros Foundation

2007, served as President of the Serbian Composers’ Union

2007-2008, served as State Secretary for Culture in the Ministry of Culture of the Republic of Serbia

In 2001, her book of essays about Syria, The Road to Damascus, was published by Geopoetika, compilation of essays Music Made of Anything (published by Arhipelag 2009) and book A private story - based on a suitcase full of letters (published by Službeni glasnik and Arhiv Srbije 2012).

A member of the Composers' Association of Serbia and the Serbian Literary Society.

As part of the celebration 90 years of Radio Belgrade, Ivana Stefanović got the Golden Microphoneaward for special contribution to the program. (2014)

The Road to Damascus (published by Geopoetika), Milos Crnjanski Prize for Prose, 2002.

For  Irene, for solo flute. Dedicated to Irena Grafenauer. 1976.

Incantations, for soprano and chamber orchestra. Text from The Egyptian Book of the Dead, 1978

Interpretation of a dream, for solo flute and tape. Text by Rosa Luxemburg and Vesna Krmpotić, 1984.

Lullabies, for mezzo-soprano, harpsichord and strings, without words 1988

Tibullus against war. For mixed choir and timpani. Text by Tibullus 1995.

Over the water, for soprano, flute and piano. Texts by Hellenic poets Sappho, Alcman and Alceaus. 2003.

She, for flute, violoncello, piano, female voice and clock. 2008. 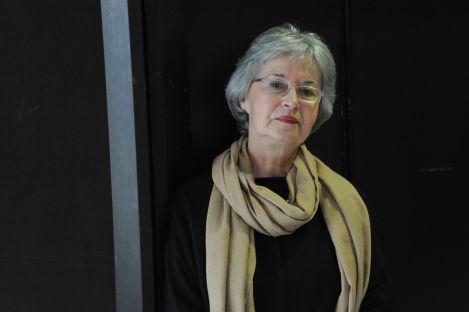 First, it was written in 1993, a year that proved most difficult for many of us. It happened, therefore, that I eliminated any “description of the ugly” from my music around that time. Life itself was looking for consolation, not for description.

Second, this piece of music was originally written for a theatre play. At the time, rehearsals for August Strindberg’s The Father were being held at the Atelje 212 Theatre in Belgrade – in an unheated auditorium. I surprised myself with the way I wrote the music for the play. Instead of writing segments that could be used in particular scenes or in between scenes as I usually would, I wrote a piece of music for the entire play, for the entire drama. I decided to use only the segments that I needed but, even so, I felt compelled to write a piece that would describe that cold space in its entirety. And the time. And the length of time.

The Play Strindberg string quartet was first performed by the Camerata Academicaa Quartet in May 1994 as part of a retrospective concert dedicated to my work. It was later performed by several other quartets – Rubikon, TAJJ, Quarteto Il Belpaese… In addition, the CD version of the 14th edition of the Novi Zvuk (New Sound) international magazine includes a performance of the piece by the Serbian string quartet Mokranjac.