Musical culture/s of the Habsburg Monarchy and its successors states 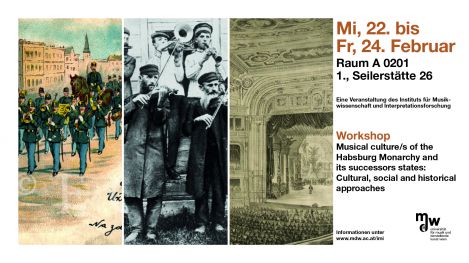 The workshop of the Department of Musicology and Performance Studies / mdw – University of Music and Performing Arts in Vienna Musical culture/s of the Habsburg Monarchy and its successor states was dedicated to one of its research areas – Central Europe. Twenty-four presentations by scholars from Europe and the US were focused on the ways of celebrating Empire in various parts of its territory, characteristics of musical life and historiography, activities of music institutions, media, as well as composers, musicians, instrument builders, processes of migrations, nation building, between the 18th and 20th centuries. The aim of the workshop was to open a wider international research, including discussions on current perspectives, projects, as well as the possibilities of future cooperation based on innovative approaches to music history in political, economic, social and cultural context/s. The objectives of sustainability of the network included the participation of both senior researchers and young scholars. The convenors of the workshop were Assist. Prof. Dr. Fritz Trümpi and Dr. Tatjana Marković.