For every musician specialised in the field of so-called early music, there doubtless eventually comes a moment when one begins grappling with fundamental questions of interpretation above and beyond one’s central musical craft—be it playing an instrument or singing, or perhaps leading ensembles or teaching. By the mid-1990s, Rudolf Hofstötter and I had already gathered a certain amount of editing experience, and we’d become increasingly dissatisfied with the standards of conventional performing editions as well as many of the scholarly series. In general, the underlying problem was that their editors had felt a need to assist the musicians using their editions with “modern transpositions” of sorts that provide performance-ready solutions to the conundrums that one certainly does encounter in the original notation. This approach is what thoroughly corrupted the Neue Schütz-Ausgabe, a complete edition that has been worked on with great enthusiasm since the Second World War and features adulterations ranging from modern clefs, unidentified transpositions, and shortenings of note values and bar-line intervals to arbitrary time signature changes and stylistically dubious continuo realisations—and the situation with Bach and Handel was little better. In general, it was often a safer bet to resort to the timeworn but formidable complete editions by Spitta, Chrysander, Forkel, and others, despite their own obvious (but in part different) inadequacies. At any rate, our feeling as teachers in the early music field was that every edition that disempowered the performing musician with suggestions (no matter how well meant) and failed to encourage—or, indeed, force—them to search independently for ways and means of finding individual solutions to musical ambiguities was unsuitable and not to be recommended. Because as Carl Dahlhaus once stated and Nikolaus Harnoncourt later on so admirably echoed in his own formulation: the point is not at all to simply realise a musical text (to “execute” it, as Igor Stravinsky so rigorously advocated), but rather to figure out and understand what exactly said text means and then to realise this meaning. So disregarding all considerations of so-called practical Urtext presentations, we set out with the intention of providing a maximum of source identity as material for the study of early music on the basis of understanding the musical text; scores realised in a way that does indeed require certain explanations on the part of the editor but still refrains from “transposition”; strict but intermediatory trueness; and above all no additions or “completions” of articulation instructions, thoroughbass realisations, and the like.

Since there seemed to be no publishers with a business interest in publishing such “challenging”, work-entailing editions in their original notation, Ewald Breunlich (who headed the mdw’s music education programmes at the time) suggested that the mdw might assume the task of publishing such editions—with the stipulation that they should grow into a true series. And it was as such that, in 1998, the first five volumes of the Wiener Edition Alter Musik (WEAM [Vienna Early Music Edition]) appeared. Since then, this series has grown by two to three volumes annually, meaning that we can now celebrate its 20th anniversary with a full 50 volumes. 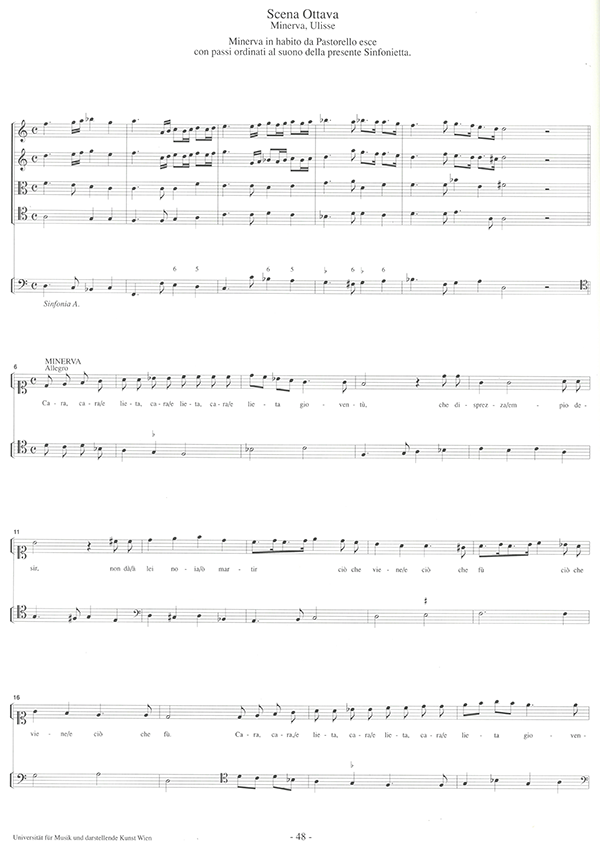 Volume 1, a complete edition of the Concerti ecclesiastici by Giovanni Paolo Cima after the Milanese movable type edition of 1610, marked the edition’s programmatic dive into the large-scale instrumental and vocal repertoire of the Seicento. The edition hence also includes virtually unknown sacred music by Johann Caspar von Kerll, Heinrich Schmelzer, H. I. F. Biber, Christof Strauss, and others. Schmelzer is also represented by two Viennese “sepolcri”, that special genre of opera-like sacred dramas, as is Ferdinand III, one of Austria’s “composing emperors”. These volumes are joined by madrigals and instrumental music from the Italian and Austrian lands. A counterpart to Volume 1 is a new edition of the Missa ac vesperae by Monteverdi (the so-called Venetian Marian Vespers, published the same year as the famous Vespro della beata Vergine of 1610 and published here as Volume 36); this volume begins what is more or less a sub-series within the edition. Monteverdi is among those composers of uncontested rank who were long denied critical editions, and here, we have set ourselves the highly ambitious goal of creating new editions of his most important opuses (as a series within the series) that are in keeping with our philological precepts, as part of which the most varied questions (depending on the genre) arise; the sacred music collections now number three large volumes, while the final volume of Monteverdi’s extant dramatic works (excepting minor pieces and fragments), to be published before the end of this year as volume 50, will contain the Lamento d’Arianna.

From the very beginning, we were guided by our interest in a repertoire that leads to the beginnings of that which continues to define Vienna as a “city of music” today and thus entails a certain cultural identity that a Viennese university of music should make a point of constantly discovering anew.