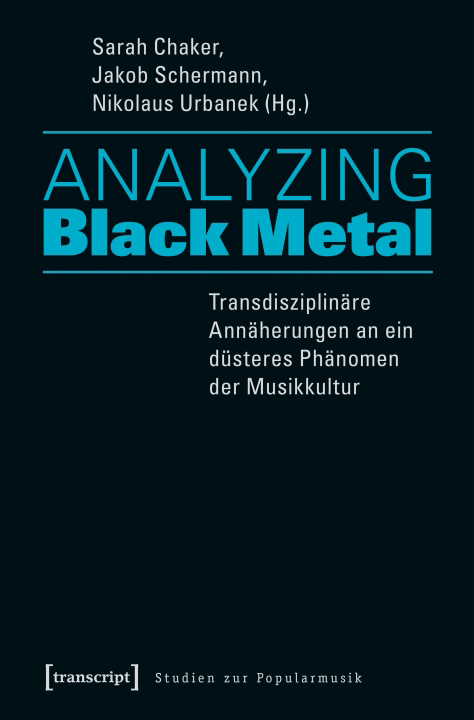 At the centre of the inverted pentagram stands black metal, a musical subculture that this book’s authors approach from the perspectives of history, sociology, aesthetics, content and ideology, and music analysis. The starting point for this publication was a day of study held at the mdw in April 2016 for the purpose of conveying and exchanging knowledge about just what is purported to be ugly, evil, and perhaps even wrong in music.

Following the book editors’ summary of ideas on “metal studies” and a historical introduction to the metal scene, Florian Heesch and Reinhard Kopanski deal with black metal as a phenomenon of media aesthetics. With an eye to the “Wild Hunt” myth, they investigate the aspect of intermediality in sound, lyrics, and album covers, focusing on textual analysis of the song Oskorei by the band Khold. Anna-Katharina Höpflinger, referring to her field research, attempts several answers to the question of why religion plays a major role in black metal. Her answers zero in on the (not exclusively) religious codes invoked by the scene’s representatives and their worldviews, leading her to important concluding considerations about what dealing with codes in this way entails for religion.

Ralf von Appen delivers a critical report on the workshop as well as a musical analysis of the example Mother North by the band Satyricon, which was dealt with at the workshop. His analysis is “unemotional and neutral”, as he himself puts it, but he does go on to contribute his own personal experiences with this piece of music. Jan G. Grünwald, in his contribution to this volume, unfortunately doesn’t succeed so well in terms of unemotionality. His approach to the same example is overly critical, and though several of his observations are certainly justified at least in part, he overdoes it with some of his points of criticism while paying too little attention to other visual and musical examples by this band and by Immortal, the other band whose material he deals with in his contribution.

Jakob Schermann and Florian Walch tackle the issue of sound in black metal, both of them doing so from a music-analytical perspective. One can instantly recognise their (enviable) knowledgeability, though those who aren’t all that familiar with this music will find it helpful to read their essays with a pencil in hand and their browsers pointed to both Google and YouTube. Schermann deals with inter- (and hyper-)textuality, to which end he examines (almost too) many examples in terms of covers, samples, and riffs. Walch, for his part, draws parallels between the various extreme metal subgenres, their playing techniques, and their aesthetic approaches. Thereafter, Dietmar Elflein draws similar parallels between various subgenres in his analysis of musical structures.

This collected volume is thoroughly suited to being read by a broader public. And since it also makes occasional forays into other extreme metal subcultures, there’s indeed much to be gained for those who research death, thrash, and heavy metal as well as general popular music researchers and aficionados with an interest in dealing—even just theoretically—with such music.