The name of the Artistic Research Center of mdw refers in its abbreviation to the meaning of “arc” as a bridge, connecting art and research/science, and therefore as an extension of the open space, in which art and research can mutually inspire each other and profit from each other. It leads to the production of new knowledge and serves as an independent contribution towards the development and opening up of the arts.  It assumes a diversity of forms of knowledge and understanding.

Knowledge about certain specific research questions is generated within the arts, the corresponding artistic research gets contextualised and the resulting gain of knowledge is documented and communicated adequately. Depending on the contents of a project various aspects play an important role here, in various specific weights: The development of artistic practices and their critical and systematic reflection, inter- / transdisziplinarity, collaborativity, plurimediality, diversity of knowledge forms and a consciousness for social relevance. Studies (composition, pedagogy) at the music academy Vienna with F. Burt and M. Jarrell and mathematics at the University Vienna • 1992/93: studies at IRCAM, Paris with Marco Stroppa and Brian Ferneyhough

1994-2003 Assistant/Professor for computer music at the International Bartok Seminar in Szombathely (H) • 1996-2001 Teacher for music theory and composition at the conservatory of Vienna since 1997: teacher for for computer music at the university for music and performing arts Vienna (mdw), since 2001 also music theory, since 2004 also composition, since 2009: habilitation in composition, associate professor • Since 2008: Head of ZiMT (“center for innovative music technology”) of mdw, since 2013 dean/head of department of the Institute for composition and electro-acoustics of mdw • 2018-2021: project leader of “creative (mis)understandings, a 3-year artistic research project funded by FWF-PEEK.

Founding member of NewTonEnsmble Vienna, of the European Bridges Ensemble, the international composers group PRISMA, and of ikultur.com. Co-curator of aNOther festival Vienna together with Wei-Ya Lin und Mahdieh Bayat. 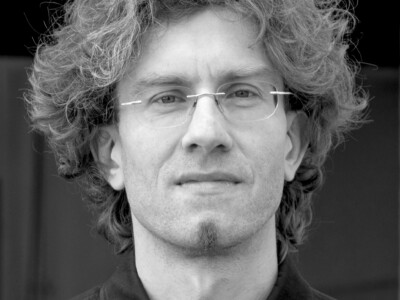 … works as a composer and performer of electroacoustic music, as a media artist, technologist and researcher of sound.
His artistic work encompasses most varied fields of audible and trans-media art, focusing on loudspeaker-based music, electroacoustic improvisation, as well as installations and interventions.

His education includes studies of technical physics in Linz, of computer music and electronic media, as well as the individual master study of interactive electronic instruments in Vienna. He earned a doctorate in composition and music theory at the University for Music and Performing Arts, Graz. Post-Doc research followed at the Austrian Research Institute for Artificial Intelligence (OFAI) in the domain of machine listening and learning.

Grill has been awarded with a Honorary Mention of the Prix Ars Electronica, with the Theodor-Körner prize, the Award of Excellence of the Austrian Federal Ministry of Education, Science and Research, the Outstanding Artist Award for Interdisciplinarity (Bonus prize) of the Austrian Federal Chancellery and various work stipends.

At mdw, he heads the University course for electroacoustic and experimental music (ELAK) and the multi-year artistic research project „Rotting Sounds“. He chairs the study commission of the artistic doctorate program. Wei-Ya Lin, an ethnomusicologist and a violist, is co-leading together with Johannes Kretz the PEEK-project in artistic research creative (mis)understandings (2018-2021) at the University of Music and Performing Arts Vienna (MDW). At the same time she is research fellow and adjunct lecturer at MDW and University Vienna.

She is initiator and curator of aNOther festival Vienna since 2010; she is leading the interdisciplinary and intercultural summer camp iKultLab since 2014; since 2013 she been involved in planning and developing projects based on scholarly research results, which are implemented by artistic inventions and activist and socio-political approaches.

In 2006 she completed her M.A. in viola performance with distinction, in 2007 the postgraduate curriculum in chamber music, and she studied composition from 2005 to 2007 at the MDW. In 2015 she received her PhD in Ethnomusicology from the same university for the thesis Music in the Life of the Tao (Taiwanese indigenous ethnic group): Tradition and Innovation, graduation with distinction. The Austrian soprano received her education at the University of Music and Performing Arts Vienna.

In addition to her concert activities as a soloist (with musical partners such as Ictus, Phace, Ensemble Mikado,…) and in ensembles (Company of Music – of which she is also the organizer, Balthasar Neumann Choir), another focus is on opera.

Among others, she could be heard and seen as the princess at the world premiere of Wolfgang Mitterer’s Das tapfere Schneiderlein, in Anæsthesia together with Franui and Nico and the Navigators, as chambermaid in the world premiere of the opera Die Gänsemagd (Iris ter Shiphorst), the moon princess in Wolfgang Mitterer’s comic opera Baron Münchhausen (at Musica Strasbourg and Kampnagel Hamburg) in three short operas of the production Gates/Gäste! (Karusell – Mirela Ivicevic, Axi – Jaime Wolfson, Inventur – Fernando Riederer) as part of the World Music Days, as Imogen in Bernhard Ganders’ sitcom opera Das Leben am Rande der Milchstrasse, and as Ida in Michael Sturminger’s staging of Die Fledermaus (Elbphilharmonie).

At the artistic research center she is responsible for office work.