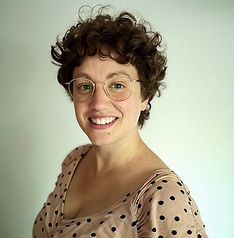 Viola Maria Schmitzer was born in 1991 in Rottweil and began playing the horn at the age of 9. In 2012, after an internship at the Junge Oper Stuttgart, she began studying "Music and Movement“ at the UdK Berlin (until 2016). Since summer 2015 she is a founding member of the STEGREIF.orchester. Since 2016 she has been involved in the further development of various concert and workshop formats of the orchestra as dramaturg, since 2017 as stage director and since 2020 as head of education. Besides her work in the orchestra Viola sings and performs with her band "die Schlangenknaben", regularly plays horn in the theater production "Fragen an Charlotte" at the Cargo Theater Freiburg and with the collective "Glanz & Krawall" Berlin and directs youth dance, music and orchestra projects. She is always on the lookout for spatial concepts that enable movement and encounter and make music particularly tangible.