On September 8, 2020, Europe’s largest refugee camp—Moria, situated on the Greek island of Lesbos and known as a “living hell”—was set afire. The continuous three-day blaze ultimately left the camp completely destroyed and 13,000 people in utter destitution. The fire had started a few days after the Greek government’s announcement that the Moria refugee camp would be quarantined due to COVID-19—and before the backdrop of the previously announced intention to convert all refugee camps into closed detention centers. Moria was built in 2015 to serve as a reception center for refugees arriving by boat on the island of Lesbos and was intended to house 3,000 people. Since the EU-Turkey Refugee Agreement of 2016, refugees had been forced to wait on the island before receiving any answer to their asylum applications. This led to the rapid expansion of the camp, which ended up accommodating around 13,000 people in wretched conditions: the internees lacked appropriate hygiene measures, a fresh water supply, and—above all—security for vulnerable groups. Over the past five years, several people had died due to exposure to cold temperatures, accidents, inadequate medical care, and clashes between uncontrolled gangs.

As the camp burned, many refugees live-streamed the fire via their mobile phones. In one of these online videos, a person can be heard chanting “Bye-bye Moria!” in a cheerful and songlike way. That was enough for many Greek TV panelists to resume their attacks on refugees: “How dare they! Not only do they burn down the shelter we provided them, but they also sing about it!” Even though it’s not known exactly who set the camp on fire, this singing was used as a proof of the refugees’ guilt. It was a slap in the face to those who had systematically organised the refugees’ socio-political exclusion and dehumanisation, which was nevertheless presented as “hospitality” and “protection.” Against the backdrop of the asymmetrical power relations entailed by international law, as a result of which refugees lack the ability to control decisions over their lives, are forced to depend on humanitarian assistance, and are ever more segregated in refugee camps, singing cheerfully against these conditions could be perceived as an act of resistance, as a reclamation of the right to be political and be heard. In such a case, music becomes a direct medium via which to perform and celebrate freedom and dignity when all other channels of political expression are blocked. 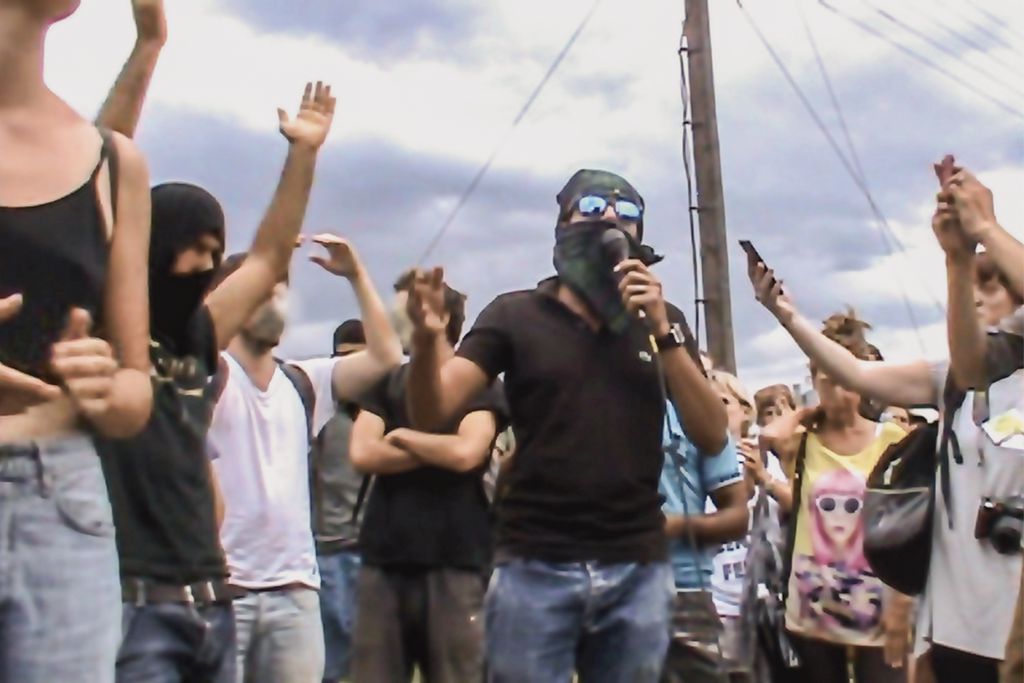 This is one of the main assumptions of my PhD research project in ethnomusicology under the aegis of the Music and Minorities Research Center. Entitled Hurriya, Azadi, Freedom Now! Music in the Experience of Forced Migration from Syria to European Borderlands, my project examines the transformative functions, meanings, and socio-political implications of musical performances by Syrian refugees and exiles throughout their journey and resettlement in Europe. Starting with my own documentation of musical performances in the summer of 2016 (in the northern Greek city of Thessaloniki and within a similar context of refugees protesting forced immobility in humiliating refugee camps), I further query the various musical strategies employed by Syrian refugees and exiles when confronted with discriminatory policies at their final destinations in Europe. Inspired by the philosophy of applied ethnomusicology, my aim is to trace and empower those potentials in the music-making of Syrian refugees that can support their sociopolitical inclusion—and thus to put ethnomusicological knowledge into action.

“Hurriya, azadi, freedom now!” was one of the slogans chanted in the streets of Thessaloniki amidst singing and dancing. Hurriya in Arabic and azadi in Persian are the words for freedom. Young protesters, refugee camp residents of mainly Syrian-Arab origin, approached the speakers set up by local activists and connected their mobile phones in order to broadcast their music. A lively beat then filled the air, interwoven with vocals and the sound of a synthesizer imitating the traditional Syrian double-pipe flute, known as the mijwiz. The young men then came together in a circle and began dancing the dabke, a popular type of Middle Eastern folk dance performed in Syria at festivals and weddings as well as during the protests of 2011’s “Syrian Revolution”. Other young men would approach the microphones to sing to their fellow protesters popular Arabic songs about the uprising, the war, and their ongoing refugee experience: “We will stay here, so the pain ceases. We will live here, the melody will sweeten!” 1

In addition to protesting, these young men—who mostly travelled alone and did not have parental roles to fulfill—invented alternative ways to break the daily refugee camp routine. They gathered and sang in their tents, they organised dance events for children as well as contests such as “Refugees Got Talent,” and they participated in events such as theatrical performances that were meant to help them connect with the social life of the city. At the same time, many LGBTIQ refugees managed to escape from these camps entirely with support from local groups. Their musical expressions, which consisted mainly of belly dance and drag show evenings, took place safeguarded within the local queer community of Thessaloniki. And finally, some refugees experienced the Internet and social media as another important window to the world, posting their music and activism.

Syrian refugees in Thessaloniki (just like, perhaps, the people who watched Moria burn) had already invented ways to get their lives back—ways that included singing and dancing in the face of pain and humiliation. Contrary to the usual public depictions, refugees are not “voiceless”. They do have a voice, but it is one that is forbidden and debased by racist policies and social attitudes. I believe that socially responsible ethnomusicological research on music in the refugee experience should, alongside documenting, analyzing and understanding these musical performances, be that of an “amplifier” and “loudspeaker.” It should be a medium via which to empower and connect refugees’ voices—and music—with the rest of the world, so that one day we will be able to sing together against all “living hells”: Bye-bye Moria! Bye-bye refugee camps!

For more information on this research project, please visit: musicandminorities.org/research/projects/music-in-the-experience-of-forced-migration