[...] in our language, German, the rule is: 99 female singers (Sängerinnen) and 1 male singer (Sänger) are collectively referred to as 100 male singers (Sänger). The 99 women are lost, no longer there – they have been hidden away in the “male drawer” (Luise F. Pusch 1990)

Language is not a neutral, objective medium that simply “depicts” social relationships. Instead, conceptions of reality are not only actively created through language, selected formulations, but also through that which is not named and is never mentioned. In short: language creates reality. Language is always at the same time action, and shapes our everyday life at university.

Gender-inclusive language addresses this point and questions the apparent neutrality of the “generic masculine” – that is, the use of a generalised masculine form of speech. Women (and other gender identities) are not represented in the generic masculine and studies have shown that, owing to this speech-form, they are also more seldom mentally included.

Accordingly, gender-inclusive language is aimed at making women (and other gender identities beyond the category of “man”) linguistically visible and thus contributes to achieving equal opportunities for the genders.

Gender-inclusive language can be implemented in German by means of various strategies. In this regard, there are forms in German which above all make women and men visible, e.g. the paired feminine & masculine forms, as in e.g. Musikerinnen und Musiker (“female musicians and male musicians”) or the “internal I” combined masculine-feminine form, as in ProfessorInnen (“female & male professors”). Other versions are not limited to a binary concept of gender and make linguistic room for a wide variety of gender identities, e.g. by using a “gender gap” as in Student_innen (“female and male students”) or an asterisk as in Mitarbeiter*innen (“female & male employees”). You can find further examples concerning gender-neutral formulations including suggestions for gender-fair language in English in the guide “Fair in Wort und Bild” (“Fair in Word and Image”).

All members of the mdw are officially required to use gender-neutral language in all letters, forms, talks and other messages addressed to the public or to members of the University (Women’s Advancement Plan [FFP] 2011, § 1). In addition, the use of gender-neutral language is stipulated in Article 7 of the Austrian Constitution and § 10a of the Austrian Equal Opportunities Act (B-GlBG). A blanket clause stating that women are “included” in the masculine form is impermissible!

The often vehemently expressed resistance to gender-inclusive language shows how closely linked language is to our mental concepts and that these can be challenged through language.

Furthermore, the fact that language can be and is discriminatory is not merely limited to the use of abusive language. Linguistic discrimination can be not only direct and explicit, but also indirect and implicit.

For example, we see discriminatory language when “disability” is used as a metaphor for weakness or ignorance, or when “black” is associated with danger or illegality. In addition, many terms that are used every day have their origins in colonial racist or medical pathologising knowledge production, and reproduce violence and injury. They are therefore neither “neutral” nor “innocent”.

However, the non-naming (or “unnaming”) of supposed “normality” is an active act too, which can have discriminatory effects. Thus, if norms such as being white, heterosexual, non-disabled, Christian, European, etc. are not named and instead only “deviations” from these norms are referred to in speech, this not only allows the said norms to seem “neutral” and universal, thus making the privileges bound up with these norms invisible, but also frequently creates a division between “us” and “them” that defines the latter by their differences.

“Fair in Wort und Bild” (“Fair in Word and Image”) guide published by the Department of Equal Opportunities, Gender Studies & Diversity of the mdw
https://www.mdw.ac.at/upload/MDWeb/gender/downloads/FairinWortundBild-Prospekt-finale-web_2017-05-04.pdf 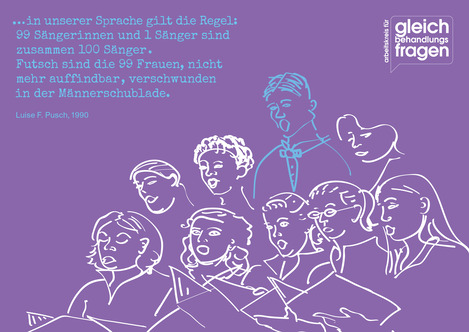