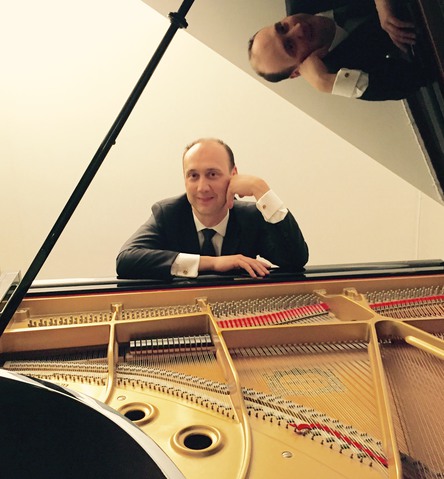 Studied at the Milan Conservatory of Music and obtained his Virtuosité in 2001 in the class of Dag Achatz at the Lausanne Conservatory. Winner of several national and international prizes. In 2008 he received special mention at the International Competition of Music IBLA Grand Prize, a distinction which allowed him to undertake a tour in the USA in April 2009 with a concert in Carnegie Hall, New York.

„Riva is a fantastic pianist“ (American Record Guide). „…A musician with class who keeps in the background to leave space for the music, who does not need to add more to draw out all the slight variations in the score or in the musical shape (Steve Bergeron, La tribune de Sherbrooke).

Adalberto Maria Riva has given recitals in Europe, Russia, and North America. He has presented musical rarities by forgotten composers on CD’s with VDE-Gallo and Toccata Classics, and received excellent reviews worldwide. In 2019 He graduated with a Master in Music Pedagogy from the Lugano Conservatory (Switzerland). He is co-founder and artistic director of Momenti Musicali and Harmonia Helvetica, two cultural associations promoting classical music in Italy and Switzerland. Born in Sicily. Recipient of the AFAM "Premio Claudio Abbado" (Bologna 2015), the most prestigious Italian prize for excellence in the arts. In Paris, he received the Aschberg Award for Creative Artists 2004 from Maria João Pires (Belgais Centre) and the UNESCO Committee. Sergio Fiorentino was his teacher and mentor. Today Mr. Munaò teaches as piano professor (MIUR Florence) and is also an official juror at the Conservatorio Statale di Musica “Cherubini”. He was also Visiting Assistant in Piano at the Musik-Akademie Basel.

Born in Vienna, she taught history of dance at the Universities of Vienna, Bayreuth and Salzburg and was curator of the Derra de Moroda Dance Archives, Salzburg (2003-2009). She git her doctorate from the University of Vienna for a thesis on Bronislava Nijinska. She was member of Forschungsinstitut für Musiktheater der Universität Bayreuth of (1982-2002), where she was in charge of the dance section of „Pipers Enzyklopädie des Musiktheaters“. Oberzaucher-Schüller’s work include books, essays, book reviews, edited volumes, catalogue entries and translations. She has presented numerous lectures at home and abroad and has been curator of several exhibitions related to dance. Her current work focuses on ballet of the last three centuries and Ausdruckstanz. She also worked extensively on Sergei Volkonsky who promoted Jaques-Dalcroze in Russia. As a honorary member of the IGRC – Internationale Gesellschaft Rosalia Chladek she was jointly initiating the revivals of Rosalia Chladek’s solo works. Born in Geneva. Studied organ with Pierre Segond at the Conservatory of Geneva, now HEM, and the ondes martenot with Jeanne Loriod at the conservatory of Saint-Maur where he finished with the ‘gold medal of unanimity‘. Since then he has played the organ in various ensembles in many European countries, and also for six years the ondes martenot in the Sextuor Jeanne Loriod. He is chief librarian of the the HEM and, as musicologist, has published monographs about Arthur Honegger, Emile Jaques-Dalcroze, and Ernest Bloch, as well as numerous articles about Swiss French and French music of the 19th and early 20th centuries. He has contributed to the Dictionnaire du Théâtre en Suisse, to the Dictionnaire de la Musique française au XIXème siècle and to the New Grove Dictionary. He also is a frequent international lecturer. In 2011 he obtained the Prize of the Fondation Pierre et Louisa Meylan for his life’s work. 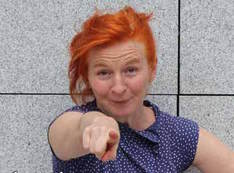 Choreographer, dance pedagogue, studied dance pedagogy at the Vienna Conservatory and musical theater at the Studio Theater an der Wien. Dancer and choreographer in Austria and France. Feldenkrais practitioner (Basel 1997-2001). Founder (1997), leader and choreographer of the independent dance company Smafu, whose dance pieces have been shown in various festivals in Europe. Collaboration with well-known composers and musicians such as Oskar Aichinger, Hannes Raffaseder, Klaus Wienerroither, Ingrid Oberkanins.  She developed various works such as Hans in Bliss and Hubertus and the Christmas Cookies (commissioned 2012 by Jeunesse Vienna). Teaching positions at various acting academies, including the Max Reinhard Seminar, the Volksoper, and others.  Workshop leader throughout Europe. Teaching position (since 2001) at the mdw in the Department for Music and Movement/Rhythmics. Piano studies with Amy Mulford.  B.A. in music, Yale University (Connecticut, USA). Studies in choral conducting in Russia (Gnessin Institute and Moscow Chamber Choir). M.A./D.M.A. in choral conducting and pedagogy, University of Iowa (US). Dalcroze License 2019 (Jack Stevenson). Since 1990 based in Vienna, Austria. Musical director, conductor, pianist, vocalist for musical theatre productions, industry shows, European tours. Composer of four musicals with professional productions in Austria, Italy, and Slovenia. Composition awards in Austria, Italy, and the U.S. 1994-2009 Artistic Director of the musical theatre academy Performing Arts Studios Vienna.  2012-2016 Director of Choral Activities and Voice Area Coordinator at Muhlenberg College (Pennsylvania, US). Since 2016 Head of Programme for Musical Theatre at the University of Music and Art of the City of Vienna. 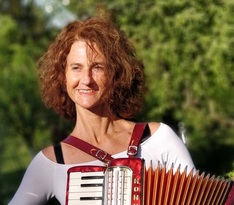 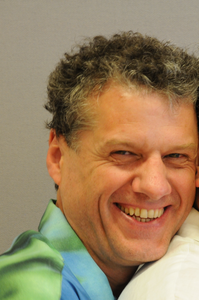 Degrees in music education, piano, rythmics at the College of Music in Detmold (D). Diplôme supérieur de la Méthode Jaques-Dalcroze in Geneva. Current teaching position in piano improvisation rythmics and Solfège at the University of Music and Performing Arts (MDW) and the private University of the city of Vienna (MUK). Regular guest teacher and workshop leader throughout Europe, Asia, and the Americas.  Pianist, keyboardist, musical director, arranger. President of FIER, Federation of Eurhythmics teachers worldwide since 2015.  2010 founder and chief organizer of „Carpe Impro“- a musical improvisation event every spring, and of Erasmus Hörraum 2012, an international symposium on ear training and listening (nominated 2013 for the ‘lifelong learning award‘ in Austria). Publications in English: „From tonality to chromaticism- Inner listening and sight singing“, in: „Le Rythme“, Geneva 2013; „Approaching the source of oceanic inspiration: Johann Sebastian Bach“,  Geneva 2014 in „Chemins de rythmique 2“ 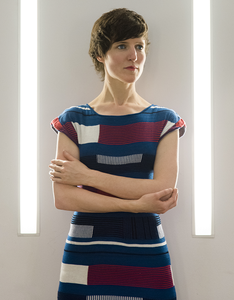 Professor for rhythmics and since 2017 head of the music and movement/eurhythmics department at the University of Music and Performing Arts Vienna (MDW).  After her studies of rhythmics and piano at the University of the Arts in Berlin and several further studies in contemporary dance, Hanne Pilgrim has worked in different artistic fields. As a pianist she focuses on chamber music, theatre music and experimental band projects; as a performer she has worked in the field of contemporary dance and contemporary music theatre. Hanne Pilgrim was a lecturer for piano improvisation, rhythmics and performance studies at the Berlin University of the Arts and the Franz Liszt Hochschule in Weimar and has given workshops in Europe and Asia. is a pianist, composer, improviser and pedagogue, based in Vienna. Her studies in music and movement education/eurhythmics, jazz piano and real time composition brought her to Vienna, Brussels, New York and Tel Aviv. Her music is strongly influenced by Jazz and the approach to music it implies. Another vital source of inspiration are movement, dance and bodywork. Verena Zeiner leads her own bands and composes for them, performs in various ensembles, works with dancers, creates music theater plays for young audiences, is founder of Fraufeld, a platform dedicated to increasing the visibilty of female musicians, teaches improvisation at the University of Music and Performing Arts Vienna and leads workshops on improvisation and diverse music- and movement related topics internationally.