In the resonance space of large ferryboats of (colonial) modernity and the nostalgic Franco-Arabic/Kabyle/Amazigh music of loss and exile, videoclips started to appear on YouTube around 2008 that show the dangerous sea passages on dodgy boats recorded by "undocumented" migrants with their cell phones. They were widely disseminated and further processed, reworked and recombined in accordance to what has been described as remix culture. The actors of such culture called themselves harraga, who since the 1990s have taken to the stages of everyday and pop cultures in the Maghreb – a terms that in Arabic means "those who burn" and designates the mostly young women and men who burn their IDs and personal documents in order to clandestinely reach Europe on makeshift motorboats. These illegal boat trips are part of a digital, audiovisual assemblage that is not only viewed and distributed, but also constantly modified, reordered, further developed, and appropriated. In the process, this structure condenses the (re)production of distance – between "Europe" and "Africa", but also of "history", the present moment and "truth" – thus surmounting a post/colonial space of crossing the Mediterranean not least in a (film)historical regard.
This lecture will attempt to enter into a political and aesthetic – i.e. affective – dialogue with these current post-media image worlds and sonic landscapes, insofar as they are open to an almost unlimited number of new spatial and temporal re-assemblages – conjunctions and disjunctions on the borders of Europe – of speeds, image memories, emotional tonalities of migration history/his and herstories and musical genealogies of longing, poverty, (de)colonization, progress, social advancement, consumption as well as of global youth cultures since the 1960s – migrant, postcolonial, Maghrebi, Chaâbi, Raï, Hip Hop. 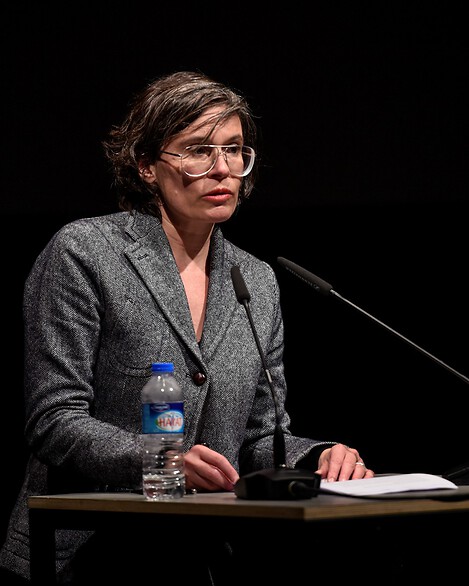 Brigitta Kuster is a cultural researcher and cultural producer, primarily interested in visual and film studies, postcolonialism/decolonization, and migration and border studies. Her current research focuses on the third, militant or accentuated or small-form cinema as well as the desideratum of a "cinema of care" as well as biometric border and identification technologies at the "external border" of the EU. She works as a Junior Professor at Humboldt-Universität zu Berlin. Her work takes the form of text, research projects, exhibitions, and filmic approaches. Her most recent publications related to the subject area of her talk are Grenze filmen. Eine kulturwissenschaftliche Analyse audiovisueller Produktionen an den Grenzen Europas (transcript, 2018), or "Europe's Borders and the Mobile Undercommons", in: Texte zur Kunst, Heft Nr. 105 / March 2017 “Wir sind ihr / They are us”, 2017, 118-125.